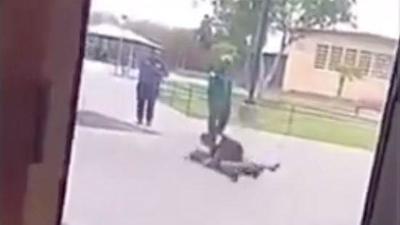 Hundreds of high school students marched out of their classes and joined community members in front of Helix Charter High School on Monday to protest the actions of a La Mesa police officer who threw a female student to the ground last week.

More than a half-dozen speakers called the officer’s response to the girl a clear example of excessive force and demanded he be removed from his position as a school resource officer.

“This protest, it isn’t about race, it isn’t about gender, it’s about a police officer using excessive force on a teenage student,” said Destiny Tuinei, a senior at the school.

The incident that sparked the outrage occurred at the University Avenue campus on Friday about 1:30 p.m.

La Mesa police Chief Walt Vasquez said a school resource officer was initially called because a 17-year-old girl was refusing to leave the school. Police said the teen, who had been suspended, twice refused to leave willingly, so the officer handcuffed her and began walking her to the school’s office.

As they walked, the student became non-compliant and made an attempt to free herself by pulling away from the officer, Vasquez said.

“To prevent the student from escaping, the officer forced the student to the ground,” the chief said in a statement released Sunday.

A number of students recorded a portion of the interaction with their cellphones, and the footage was shared thousands of times on social media.

The videos appear to show the officer using his shoulder to propel the girl into the concrete and then pinning her to the ground.

A woman speaking on behalf of the family gave a different version of what led to the altercation. Aeiramique Blake said the teen was assigned to in-school suspension for tardiness when the girl told an instructor she wasn’t feeling well. The student explained she was anemic, but the teacher allegedly accused her of being on drugs, according to Blake. 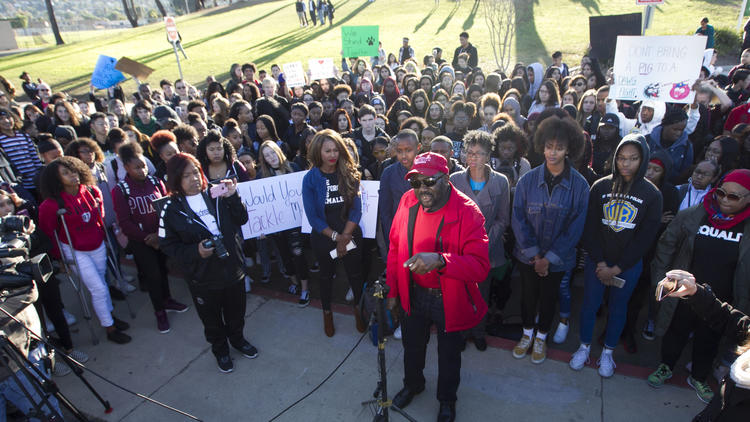 Students from Helix Charter High School walked out of class early Monday morning to join a protest and listen to speakers after a video showing a La Mesa Police officer assigned to the school slamming a 17 year-old student to the ground twice while escorting her off the campus Friday went viral over the weekend. (John Gibbins)

The instructor asked to search her backpack, and the girl complied. No drugs were found, but the instructor found pepper spray in her bag. The teacher said because pepper spray is considered a weapon, the student would have to leave campus.

Blake said the girl felt the instructor’s behavior was discriminatory and she decided she wasn’t going to leave campus until she felt she was being heard.

The teen is a senior at the school and has attended since her freshman year.

Blake is a community activist and organizer in San Diego. Her younger sister is also a student at Helix Charter High and helped put Blake in touch with the arrested girl’s family.

A spokeswoman for the charter school said that because the incident involved a disciplinary matter, she was not able to discuss it further.

During Tuesday’s protest, students held a number of signs aloft. One read, “We’re anti-police brutality, we’re not anti-police.” Another said, “We stand together.”

Most of the speakers were students at the school. In addition to calling for the officer’s removal, they also demanded a transparent investigation into the officer’s decision to use force and for the La Mesa Police Department to implement a restorative justice program at the campus.

Mahamed Ezana, a sophomore, encouraged the community to rally behind the school to ensure change happened

“She did not pose a threat to any single person, and if we don’t stand up and say that this is not okay then no one else is going to do this for us,” Ezana said. “We’re saying to La Mesa P.D. that this kind of violence is unacceptable. They must implement deescalation policies and have restorative justice in our schools and across our city.”

Restorative justice programs, which have been implemented at San Diego Unified School District schools, focus on using communication to resolve conflict. The method is thought to foster an environment of trust and empathy among students and staff members.

At the conclusion of Monday’s hourlong protest, organizers urged students to return to class.

Vasquez said the department will be conducting a review of the incident and that the video footage will be part of that investigation.

Officials have not yet said whether the officer will be placed on administrative leave while the department looks into what happened. They also haven’t said how long he has been a resource officer on campus.