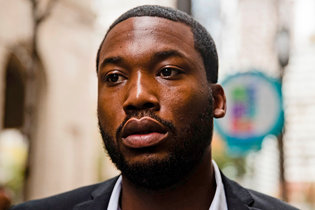 The Philadelphia district attorney’s office on Monday threw its support behind a campaign to overturn the conviction of the rapper Meek Mill, the latest turn in a decade-old drug and guns conviction.

In a hearing before Judge Genece E. Brinkley, prosecutors said that Meek Mill’s 2008 conviction on drug and firearm charges should be vacated, pointing to questions about the credibility of his arresting officer.

Any decision to grant a new trial would have to be made by Judge Brinkley, who has overseen the rapper’s case for years and who sentenced him to prison in November for probation violations. She has scheduled another hearing for June, and declined to hear arguments on Monday to release the rapper on bail.

Still, supporters of Meek Mill, who had previously scheduled a rally outside the courthouse during the hearing, greeted the news with cheers.

Meek Mill, whose given name is Robert Rahmeek Williams, is incarcerated in a state prison in Chester, Pa., southwest of Philadelphia. He served eight months in prison after being convicted on charges related to the possession of drugs and guns. He was released in 2009 and was then placed on probation for five years, though that period has been extended several times. 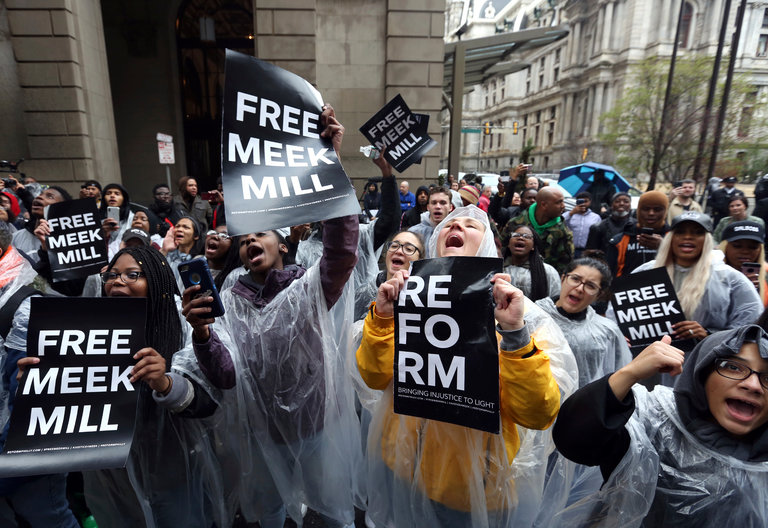 Protesters rallied in front of a courthouse during a hearing for the rapper Meek Mill in Philadelphia on Monday. Credit Jacqueline Larma/Associated Press

He was sentenced by Judge Brinkley to two to four years in November for probation violations, which included two arrests, including an arrest for reckless driving while shooting a music video in New York City.

The case has been a rallying cry for criminal justice reformers, who have called the sentence heavy-handed. In November, the rapper Jay-Z wrote in an Op-Ed for The New York Times that Meek Mill’s case was just “one example of how our criminal justice system entraps and harasses hundreds of thousands of black people every day.”

“The fact that he’s still in jail is mind-boggling,” Joe Tacopina, one of Meek Mill’s lawyers, said in an interview on Monday. “Under what other scenario in this country does a guy stay in jail when the district attorney just acknowledged that his conviction needs to be overturned?”

Mr. Tacopina said that Meek Mill’s legal team would appeal to a higher court to seek the rapper’s immediate release.

The rapper’s case has drawn high-profile support in recent months, including from athletes and fellow recording artists. Last week, he was visited in prison by the owner of the New England Patriots, Robert Kraft, who told reporters that he supported Meek Mill’s release.