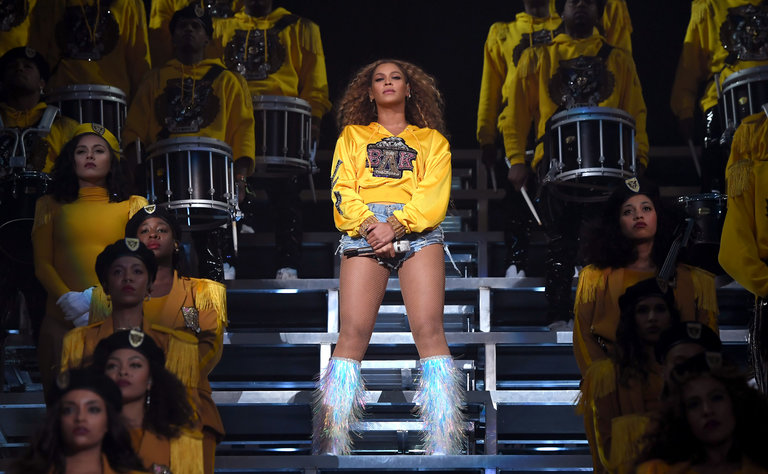 Review: Beyoncé Is Bigger Than Coachella

INDIO, Calif. — Let’s just cut to the chase: There’s not likely to be a more meaningful, absorbing, forceful and radical performance by an American musician this year, or any year soon, than Beyoncé’s headlining set at the Coachella Valley Music and Arts Festival on Saturday night.

It was rich with history, potently political and visually grand. By turns uproarious, rowdy, and lush. A gobsmacking marvel of choreography and musical direction.

And not unimportantly, it obliterated the ideology of the relaxed festival, the idea that musicians exist to perform in service of a greater vibe. That is one of the more tragic side effects of the spread of festival culture over the last two decades. Beyoncé was having none of it. The Coachella main stage, on the grounds of the Empire Polo Club here, was her platform, yes, but her show was in countless ways a rebuke.

It started with the horns: trumpets, trombones, sousaphones. For most of the night, the 36-year-old star was backed by an ecstatic marching band, in the manner of historically black college football halftime shows. The choice instantly reoriented her music, sidelining its connections to pop and framing it squarely in a lineage of Southern black musical traditions from New Orleans second line marches to Houston’s chopped-and-screwed hip-hop.

Her arrangements were alive with shifts between styles and oodles of small details, quick musical quotations of songs (Pastor Troy’s “No Mo’ Play in G.A.,” anyone?) that favored alertness and engagement. As always, one of the key thrills of a Beyoncé performance is her willingness to dismantle and rearrange her most familiar hits. “Drunk in Love” began as bass-thick molasses, then erupted into trumpet confetti. “Bow Down” reverberated with nervy techno. “Formation,” already a rapturous march, was a savage low-end stomp here. And during a brief trip through the Caribbean part of her catalog, she remade “Baby Boy” as startling Jamaican big band jazz.

She does macro, too — she was joined onstage by approximately 100 dancers, singers and musicians, a stunning tableau that included fraternity pledges and drumlines and rows of female violinists in addition to the usual crackerjack backup dancers (which here included bone breakers and also dancers performing elaborate routines with cymbals).

Some superstars prize effortlessness, but Beyoncé shows her work — the cameras captured the force and determination in her dancing, and also her sweat. She performed for almost two hours, with only a few breaks, and her voice rarely flagged. Occasionally her set was punctuated with fireworks that, compared with what was happening onstage, seemed dull.

Beyoncé was originally meant to perform at Coachella last year, but rescheduled for this April after becoming pregnant; her Coachella performances this weekend and next are her only solo U.S. dates this year. “Thank you for allowing me to be the first black woman to headline Coachella,” she said midset, then added an aside that was, in fact, the main point: “Ain’t that ’bout a bitch.”

Big-tent festivals, generally speaking, are blithe spaces — they don’t invite much scrutiny, because they can’t stand up to it. But Beyoncé’s simple recitation of fact was searing, especially on the same night that, in Cleveland, the Rock & Roll Hall of Fame finally inducted Nina Simone and Sister Rosetta Tharpe, 15 and 45 years after their deaths, and also Bon Jovi, a band in which everyone is very much alive.

She was arguing not in defense of herself, but of her forebears. And her performance was as much ancestral tribute and cultural continuum — an uplifting of black womanhood — as contemporary concert. She sang “Lift Every Voice and Sing,” often referred to as the black national anthem, incorporated vocal snippets of Malcolm X and Chimamanda Ngozi Adichie, and nodded at Ms. Simone’s “Lilac Wine.”

And she rendered her personal history as well. During the second half of the show, she unfurled a kind of This Is Your Life in reverse. First came her husband, Jay-Z, on “Déjà Vu” — with him, she was affectionate while easily outshining him. Then, a true surprise: a reunion with her former Destiny’s Child groupmates Kelly Rowland and Michelle Williams, during which she happily ceded the main spotlight. After that came a playful dance routine with her sister, Solange, on “Get Me Bodied.” (Sadly, there was no “Ring Off” with her mother, nor a rendition of “Daddy Lessons” with her father.)

As Beyoncé has gotten older, she’s been making music that’s increasingly visceral, both emotionally and historically. She is one of the only working pop stars who need not preoccupy herself with prevailing trends, or the work of her peers. She is an institution now, and that has allowed her freedom. “Lemonade” is her most accomplished album, and also a wild and risky one — thematically but also musically.

That may be one reason that last year, Beyoncé lost the Grammy for album of the year to Adele, the sort of upset that triggered a storm of criticism about the Grammys’ relevance, and, effectively, an almost-apology from Adele. In time, though, that moment will feel like a glitch. That space on the mantel will be filled by a National Medal of the Arts, or a Presidential Medal of Freedom. Like no other musician of her generation apart from Kanye West, Beyoncé is performing musicology in real time. It is bigger than any tribute she might receive. History is her stage.