A police officer has been placed on administrative leave as a result of the confrontation with Desmond Marrow.

A video showing former NFL player Desmond Marrow being violently arrested by police in Henry County, Georgia, is going viral, and one of the officers has been placed on administrative leave.

“During the arrest the police knocked my teeth out, slammed me on my head and choked me out until I was unconscious,” he said in the post, adding that he also suffered a shoulder strain and a concussion during the incident.

“I was fully cooperating with the officers with ZERO resistance. I thought I was going to die. I was sure I was passing out or dying when [the officer] was choking me as my breath kept slipping away.”

The report said when someone in another vehicle tossed coffee at the 30-year-old Marrow’s car, he chased it into a shopping center outside Atlanta.

An officer who responded to the scene said he saw Marrow and “several others” arguing in the mall parking lot.

A witness told the officer that he overheard Marrow say he was “going to shoot them,” according to WMAZ TV.

Other officers who arrived on the scene reportedly asked Marrow if he had a gun. After he told them no, an officer patted him down but found no weapon.

After officers told Marrow they were going to arrest him, he refused to cooperate. That’s when the struggle captured on video began.

Marrow was later charged with making terroristic threats, reckless driving and aggressive driving, according to the police report.

“Prior to the violent incident with Henry County sheriff’s deputies, Mr. Marrow was the victim of a hate crime,” Boyd and Stewart said in a statement late Friday afternoon, according to WXIA. “He was called racial slurs by two white males while driving and had hot coffee thrown in his vehicle by these individuals. He then followed the individuals and a discussion ensued.

“A separate individual called 911 and erroneously reported that Mr. Marrow had a weapon, which he did not. When deputies arrived on scene, Mr. Marrow cooperated with their demands,” the statement continued. “We are working to determine why the deputies resorted to this level of violence with a man who was already handcuffed and complying with orders.”

A magistrate judge later dropped the terrorist threats charge and the case was transferred to the DA’s office, which must now decide if the case will be presented to a grand jury, according to the Atlanta Journal-Constitution.

On Friday, one of the officers involved in the incident was placed on administrative duty Friday pending the outcome of an internal investigation, according to the Henry Herald.

“Henry County Police Department is reviewing the events surrounding the arrest of Mr. Desmond Marrow, who was arrested by Henry County Police on December 2, 2017,” Capt. Joey Smith told the paper. “Although at the time of arrest an initial use of force review was conducted by Internal Affairs, earlier this month, Police Chief Mark Amerman ordered an Internal Affairs Investigation to be conducted.

“As of today, the officer involved is on administrative duty pending the outcome of the investigation. The criminal case against Mr. Marrow is currently pending in the Henry County District Attorney’s Office,” Smith continued. “The Henry County Police Department takes any charges of excessive use of force very seriously and wants to assure the public that this event will be fully investigated.”

Marrow was a defensive back for the University of Toledo and briefly played with the Tampa Bay Buccaneers in 2012, but never made it out of pre-season, according to NFL.com. 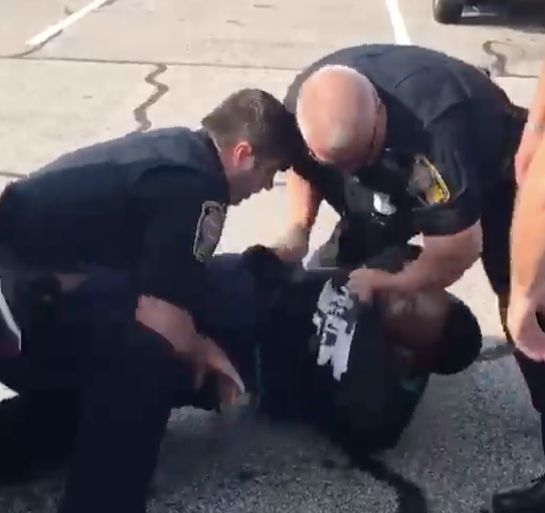