LOUISVILLE, Ky. — A white nationalist on probation for harassing a protester at a Donald Trump campaign rally in Kentucky in 2016 is going to jail after a domestic abuse incident in Indiana.

Matthew Heimbach, an alumnus of Towson University, was ordered to serve 38 days in jail for violating the terms of his two-year probation for the Trump rally incident.

Heimbach, 27, appeared Tuesday in misdemeanor court in Louisville and was led away in handcuffs.

“I really hope that I do not see you back here in this court,” Jefferson County District Judge Stephanie Burke said.

“Yes, your honor,” Heimbach replied before being led to the county jail.

Heimbach’s probation violation was for an arrest in Paoli, Indiana, in March on battery charges for allegedly assaulting his wife’s stepfather, David Matthew Parrott. A police report said Heimbach choked Parrott twice into unconsciousness. Heimbach was arrested at his home after police heard him arguing and scuffling with his wife, who was inside with him and their two children. Brooke Heimbach told police Heimbach had assaulted her. 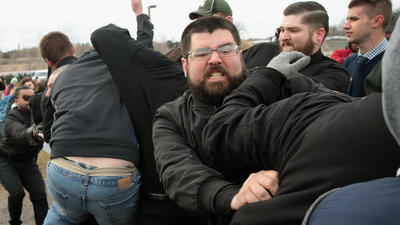 He has a pattern of violent behavior.

Heimbach is chairman of the Traditionalist Worker Party, which has described itself on its website as “fighting to secure the existence of our people and a future for white children.” He has been a leading figure in the white nationalist movement and was one of the scheduled speakers last year at a white nationalist rally in Charlottesville, Virginia.

Heimbach was on probation for physically harassing an African-American woman who was protesting at a rally in Louisville for then-presidential candidate Trump in March 2016. He had a 90-day jail sentence suspended in that incident as long as he stayed out of trouble and took anger management classes.

Heimbach’s attorney, Jay Lambert, said Tuesday that the 38-day jail term was agreed upon after negotiations with prosecutors.