If the legacies of other activist athletes are any example, the ostracized former NFL quarterback will emerge as an icon of social justice.

Within minutes of each other Wednesday afternoon, Mike Pence and Donald Trump Jr. spiked the proverbial football. NFL owners had just announced a new policy for the national anthem that called for players to either stay in the locker room or stand for the song. Kneeling would now be punished. Both men tweeted the same hashtag: #winning.

The glee spread among Republicans. Mike Braun, a Senate candidate in Indiana, sent out an email blast extolling the news, and dared his Democratic opponent, Joe Donnelly, to oppose it. On CNN, Chris Cuomo asked Nancy Pelosi for her reaction. The leader of the Democratic Party in the House seemed in no mood to lock arms with the players and took a pass. “I love the national anthem,” Pelosi said. “And I love the First Amendment and I’ll leave it at that.”

The player who started it all, Colin Kaepernick, began his protest in the fall of 2016 when he knelt to bring attention to racial inequality and police violence against minorities. Since the end of that season, when he left the San Francisco 49ers, he hasn’t played a down as a professional quarterback. Eric Reid, Kaepernick’s fellow protester and former teammate, also remains unemployed. (Both have sued the league for collusion.) NFL fans, meanwhile, support the new anthem policy overwhelmingly, according to one new poll. All of this is to say that the league—with a big push from the White House—has delivered a fairly complete rebuke of Kaepernick and other outspoken football players, many of them black; and come the 2018 season, which begins in a few months, an effective muzzling of them, as well. 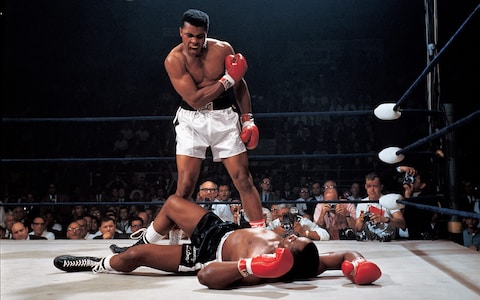 But if history is any guide, the marginalization of outspoken and high-profile black athletes will not stay a win forever. During the last half century, dominated as it has been by culture-rattling debates over race and social justice, there have been numerous examples of activist athletes who suffered ostracism and worse, only to see themselves welcomed and even glorified decades later by a society whose conscience finally caught up to the righteousness of their causes. The media who scorned them in the hottest moment of their protest produced respectful biopics and coolly reconsidered their roles in a much longer arc of history. In short, these kneeling football players’ reputations will likely be rehabilitated sufficiently that the general public who boycotted and harassed them for disrupting their entertainment with politics may well one day embrace them as unsung heroes. “This isn’t a win that history is going to look too kindly on,” said Lou Moore, a sports historian and Grand Valley State University professor. “It will take some time, but Kaepernick will be proven right.”

Curt Flood sued for free agency in Major League Baseball. Once accused of trying to destroy the sport, he has been honored at the Hall of Fame in Cooperstown. Muhammad Ali, the one-time draft dodger, is an American hero who was eulogized at his funeral by a former president. John Carlos and Tommie Smith, the track stars who received death threats for raising their fists on the medal stand at the 1968 Olympics, have statues at the Smithsonian’s museum of African American history.

Remarkably, the White House itself just delivered a lesson in how this evolution occurs. On Thursday, President Trump issued a presidential pardon to Jack Johnson, the first black heavyweight boxing champion. Johnson wasn’t a protester or an activist or anything of the sort. He was a showboat, who once bet on the Nazi prize fighter Max Schmeling to beat black hero Joe Louis. When Schmeling won, Johnson pranced around a heartbroken Harlem waving his winnings. But in 1908, when Johnson won his first crown, his audacity to cavort with white women drew the ire of white America. He was later arrested for transporting women across state lines for the “purpose of prostitution or debauchery,” known as the Mann Act, and served several months in prison.

The irony of Trump’s pardon of Johnson is that just hours earlier he had appeared on “Fox & Friends” and suggested that any NFL player who doesn’t stand for the anthem isn’t just a “son of a bitch,” as he tweeted in September, but that they “shouldn’t be in the country.” Indeed, the same racism that underpinned the persecution of Jack Johnson’s behavior would be easily recognizable to the NFL players who have knelt today, who see frequent and deadly examples of the uneven, racially tinged administration of justice. The contradiction inherent in Trump’s words and acts was not lost on one prominent sports figure who happens to be one of Trump’s biggest supporters.

“I love the man, Donald Trump,” Don King told me. “But it’s confusing.” 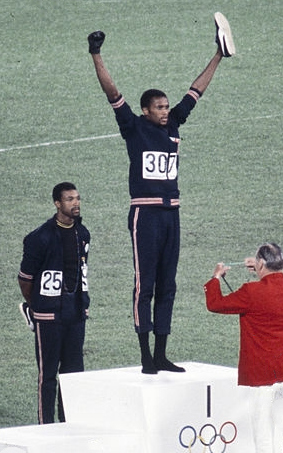 Before Brent Musburger went on to a long career as a TV broadcaster, he called Tommie Smith and John Carlos “black-skinned storm troopers” in a newspaper column after their protest. A few months later, Smith returned home returned to his family’s ranch in California’s San Joaquin Valley, where he promptly received a package in the mail filled with cow manure. “Most Americans, I suspect, would regard the manure as an appropriate gift,” a Los Angeles Times reporter wrote. Both had brief professional football careers but struggled to build their lives. They bounced between jobs; they had marital trouble. (Carlos’s first wife would eventually commit suicide.)

The thaw in America’s view of Smith and Carlos didn’t come until more than a decade later, beginning when Carlos was hired as a consultant for the 1984 Olympics in Los Angeles; the famous raised fist gesture was also featured in an exhibit at the California Afro-American Museum during the games. By 1991, Sports Illustrated ran a retrospective, officially declaring that America’s views had softened. “And now Smith, Carlos and their country have arrived at a stage that seems to allow the good done by their gesture to be weighed against their sacrifice,” wrote Kenny Moore. Fifteen years later, San Jose State erected a statue depicting their famous moment in Mexico City. And in 2008 ESPN honored both men with the network’s Arthur Ashe Courage Award. Time helped, but Moore notes that “there was a change in how the Civil Rights movement was viewed, and they were part of it.”

Ali had a different ally: the boxing ring. After he was stripped of his heavyweight title and had been banned for three years from the sport—a punishment that was aided by Ronald Reagan, then the governor of California who vowed he would never permit Ali to compete in his state—he enjoyed a Hall-of-Fame career. According to Ali biographer Jonathan Eig, Ali went quickly from pariah to someone sports fans could appreciate by virtue of his talent, beginning with his 1971 heavyweight title fight against Joe Frazier.

“It was a war and a brutal fight,” Eig told me. “Even if you hated him, you had to admit that he’s tough.” And as Smith and Carlos were aided by changing attitudes towards Civil Rights, the country’s antipathy toward the Vietnam War helped Ali, too. “He was proven right,” Eig said. “He was right about the war, he was right about black soldiers dying in disproportionate numbers.”

Lou Moore, the sports historian from Grand Valley State, believes Ali’s redemption story has a more sinister angle, pegged to when Ali, beset with Parkinson’s, lit the torch at the Atlanta Olympics in 1996. Only then, Moore told me, did Ali become a national hero to all corners of America. “It was when he wasn’t threatening White America, when he could barely speak,” Moore said. The cases of Jack Johnson and Curt Flood are simpler to understand: they challenged labor and social constructs that now seem anachronistic—and, in Jackson’s case, painfully racist—free agency in sports and interracial dating.

What does all this mean for Kaepernick? First, it’s important to remember that the former quarterback has already been named GQ’s Citizen of the Year and received the Muhammad Ali legacy award from Sports Illustrated; each recognized the $1 million Kaepernick has donated to various charities, even as he searches for an NFL job. “He’s already recognized as a social justice hero,” Leah Wright Rigueur, a professor of public policy at Harvard, told me. “His cause has already been recognized as righteous by so many outside the NFL and conservative circles.”

Kaepernick almost certainly won’t have the chance to travel Ali’s route to greater acceptance. His odds of playing again are scant, which means there will be no redemptive season back on the field. Instead, there will be books and movies in the coming years. Kaepernick will be attached to the Black Lives Matter movement, and as the struggles of minority communities—institutional racism, mass incarceration, for example—are better understood in future years, he will be a symbol of the moment. Plus, he’ll have the benefit of Trump as a foil.

Even the NFL may one day in the distant future attempt to recast its own treatment of Kaepernick—or at least some sanitized version of him. Because, as Eig told me, “When you’re taking a stand, if you’re against discrimination and for equality, you’re probably going to end up on the right side of history.”