Donald Trump managed to make Roseanne Barr’s racism about himself.

On Wednesday, Trump decided that he, too, should get a phone call.

“Bob Iger of ABC called Valerie Jarrett to let her know that ‘ABC does not tolerate comments like those’ made by Roseanne Barr,” Trump tweeted. “Gee, he never called President Donald J. Trump to apologize for the HORRIBLE statements made and said about me on ABC. Maybe I just didn’t get the call?” 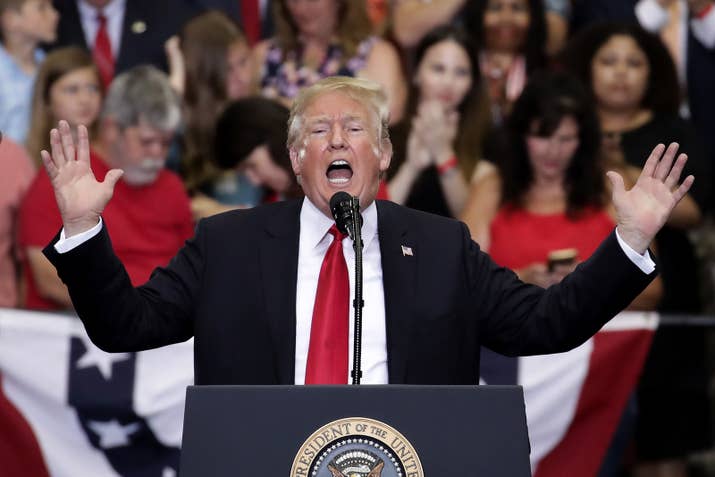 It’s unclear what, exactly, Trump wants an apology for. But in 2017, ABC News investigative reporter Brian Ross incorrectly reported that Michael Flynn, the former national security adviser, was to testify that as a candidate, Trump had instructed him to make contact with the Russians. The story was later walked back by Ross during an appearance on World News Tonight. Ross said his source later told him Trump had instructed Flynn to contact Russians when he was the president-elect, not while he was a candidate.

ABC News apologized for the mistake in a written statement: “We deeply regret and apologize for the serious error we made yesterday. The reporting conveyed by Brian Ross during the special report had not been fully vetted through our editorial standards process.” Ross was suspended by ABC for four weeks without pay.

ABC and Disney did not immediately respond to a request for comment, and did not confirm Jarrett’s account that Iger had called her to apologize.

Barr’s tweet on Tuesday morning said the former adviser to President Obama was the “baby” of Egypt’s Muslim Brotherhood political party and the movie Planet of the Apes. At first, Barr defended her tweet, calling it a “joke” and saying “Muslims r NOT a race” to another Twitter user. Barr later apologized to Jarrett, and after ABC announced her show’s revival was being canceled, she apologized to the show’s cast and crew.

When asked if the president thought it was right for ABC to cancel Barr’s show on Tuesday, White House press secretary Sarah Huckabee Sanders said, “The president is focused on North Korea. He’s focused on trade deals. And he’s focused on rebuilding our military, the economy. And that’s what he’s spending his time on — not responding to other things.”